i have quite a big collection of dvds,so far its about 1100,plus alot of cds and ps3 games,and plenty of books to stick my nose into.


great game that look's amazing,can get slightly annoying with the controls but this really does not effect the gameplay,some good moves can be pulled off in what i think is one the best looking ps3 games around,well worth a buy in my opinion.

Survival Wisdom & Know How: Everything You Need to Know to Thrive in the Wilderness review


This is a superb book,if you want the old skill's to survive or even live out in the wilderness then this is it,but the size is way too big,it won't be going with you in your rucksack,i should have read the description before i bought it from Amazon,but still worth every penny as far as iam concerned,just don't take it into the wild's because you won't be able to carry it.


I think this game is a little bit underrated because it is one hell of a game,tracing america's fight against the japanese and the russian's against the german's,the graphic's are spot on and the action relentless from jap's charging out of the jungle at you or a countless german onslaught who even though they are finished in the war will not give in.And a special bonus of nazie zombie's when completed,10/10 from me for a top rank game.


the sony joypads are by far the best to have with your ps3,there may be cheaper one's out there but in no way can they match the original one's made by sony.


excelent guide to the game with info on all the missions,ammo dumps,loads of hints and tips in a walkthrough guide which is priceless when having trouble with the game.Highly recommended for all those wannabee soldiers out there.


If you want to get into writing then this is a very usefull book to have,it explain's everything in simple term's,give's example's of how not to write and how to write better.Excellent for would-be writer's,a 5/5 from me.

"a cracking list of war films,got most on dvd"

"carrie fisher was the original and the BEST"

"not many better actors out there like him,one of the best"

Phil_Sump
Posted: 9 years, 9 months ago at Apr 13 14:19
Hi, I saw you have an interest in the war movie genre and wondered if you would like to check out my list that I;ve been working on and let me know what you think. 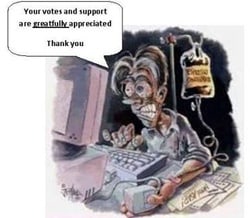 
Thanks for your continued support

Charlize Be Thy Name

Thank You for Your Support & Votes

Have a Good Week-End

Hope your week is going well!!!

Thank-You for all your Continued Support and Votes

Deleted
Posted: 11 years, 5 months ago at Aug 6 1:31
Yeah, Godzilla is undeniably the King of the Monsters. He's only second on my Greatest Giant Movie Monsters list because it's ordered by release date, earliest to latest. =)